In case you missed them, here’s a few pieces I’ve recently written and published for Quanta magazine, Undark magazine, and Knowable magazine. Thanks as usual to all of my excellent editors. I’m only posting brief excerpts here, so if you’re interested, please check out the whole thing using the links below.

Interstellar Visitor Found to Be Unlike a Comet or an Asteroid

The mystery of ’Oumuamua, the first interstellar object ever observed, continues to deepen. A new analysis argues that if it were a comet, it would have broken apart as it passed near the sun. 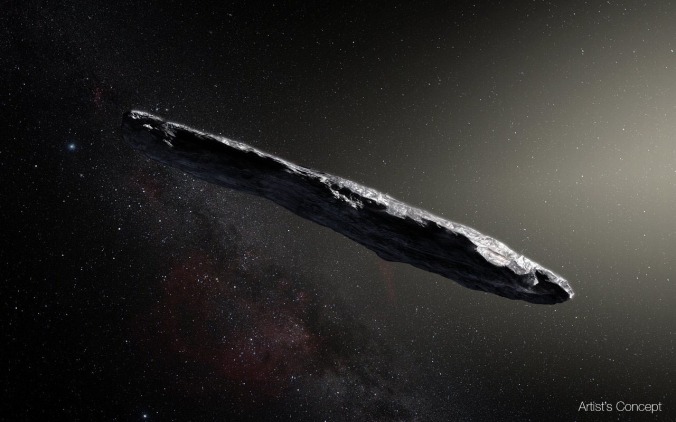 Artist’s concept of interstellar object1I/2017 U1 (‘Oumuamua) as it passed through the solar system. (Image credit: ESO / M. Kornmesser)

Like a hit-and-run driver who races from the scene of a crash, the interstellar guest known as ’Oumuamua has bolted out of the solar system, leaving confusion in its wake. Early measurements seemed to indicate that it was an asteroid — a dry rock much like those found orbiting between Mars and Jupiter. Then by this past summer, astronomers largely came around to the conclusion that it was instead a comet — an icy body knocked out of the distant reaches of a far-off planetary system.

Now a new analysis has found inconsistencies in this conclusion, suggesting that ’Oumuamua may not be a comet after all. Whether it’s actually a comet or an asteroid, one thing is clear: ’Oumuamua is not quite like anything seen before.

The object was first spotted a year ago by scientists with the Pan-STARRS telescope in Hawaii. ’Oumuamua (a Hawaiian word meaning “scout”) appeared to be a rocky, elongated asteroid at first, a stubby cosmic cigar.

Other astronomers quickly joined in the hunt, measuring everything they could. (One team even trained radio telescopes on it to check whether it might be transmitting extraterrestrial broadcasts. It was not.)…

[Read the entire piece in Quanta magazine, published on 10 October.]

A Calculating Look at Criminal Justice

If you’re charged with a crime in the United States and can’t pay bail, a judge will lock you up until your trial to make sure you actually appear. You can go into debt to a bond company to cover the bail, or — guilty or not — risk losing your job, home, and even your children while you wait behind bars for months.

In California, that will soon change. Beginning in October of next year, a law signed by Governor Jerry Brown will replace the bail system with a computer program that can parse your background and determine the likelihood that you will flee if released. Judges will use a resulting flight-risk and public safety-risk “score” to determine whether to keep you jailed, or let you free while you await trial.

The new law is supposed to help remove biases in the bail system, which mostly harms poor people, and it’s part of a growing trend in the use of software in the day-to-day machinery of the justice system. Some of these algorithms are relatively simple, while others use complex combinations of data…

As the criminal justice system becomes more automated and digitized, police officers, prosecutors, and judges have increasingly massive data sets at their fingertips. The problem, as many critics have repeatedly argued, is that the algorithms that parse, interpret, and even learn from all this data may themselves be biased — both in how they are built and how the courts wield them…

[Read the entire piece in Undark magazine, published on 26 September.]

Fighting urban violence, one empty lot at a time

Could cleaning up neighborhoods make cities safer? Researchers are looking at novel, inexpensive solutions to crime that everyone can agree on.=

Violence dramatically affects the people directly involved — but it doesn’t stop there: The repercussions, especially of gun violence, ripple out across entire communities. People become frightened, stressed and less engaged in neighborhood life. Their physical and mental health suffer. Those who are financially better off move away, and housing prices decline, setting in motion a downward community spiral — one that engenders still more violence.

“Violence is not just these little isolated instances of one individual doing a bad thing to another person,” says Michelle Kondo, a social scientist at the US Forest Service Northern Research Station in Philadelphia. “Crimes happen in a context, and environments can contribute to those acts of violence.”

Kondo is one of a growing number of sociologists, epidemiologists and public health researchers who are focusing on neighborhoods as the most effective context in which to study violence and devise innovative interventions. They say that how communities are arranged — and the subtle cues people encounter as they move about in them — affects the way they live and interact with others. This makes a place either vibrant and welcoming, or the opposite…

[Read the entire piece in Knowable magazine, published on 16 August.]