Everyone grows up eventually. It’s hard to believe, but the Hubble Space Telescope (HST), which many astronomers and astronomy fans consider to be one of the most important telescopes of our generation, turns 25 this month. Hubble, built and funded by NASA and the European Space Agency, was launched on 24th April 1990, only a half year after the fall of the Berlin Wall. Its instruments produced numerous iconic images, including the spectacular ones below.

Everyone is celebrating this anniversary! Check out hubble25th.org for more images, news, and information. The 2010 documentary, “Saving Hubble,” is now viewable for free. Plus, in a public lecture on 1st April as part of National Academies’ Space Science Week, Jason Kalirai (Space Telescope Science Institute) highlighted Hubble’s many scientific contributions. 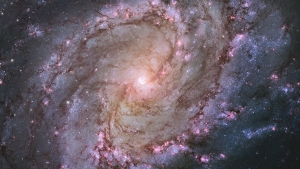 Now astronomers and the astronomy-loving public are anticipating and preparing for Hubble’s successor, the James Webb Space Telescope (JWST, named after a former NASA administrator). Over its ambitious 5 to 10-year mission (a Star Trek-style time-scale!), its powerful cameras and spectrometers will focus on near- to mid-infrared wavelengths and will examine planetary systems in our galaxy as well as distant galaxies forming in the early universe, only a few hundred million years after the Big Bang. As you can see, it’s built with a folding segmented mirror and a deployable sunshield. It’s not servicable like Hubble was, as JWST will orbit one million miles from Earth.

As I’ve written in previous posts, JWST’s gigantic budget has been contentious in the astronomical community. While astronomers believe that JWST will likely have a big scientific impact, especially on the fields of planetary physics and galaxy formation, others are unhappy that its cost inevitably results in smaller programs being cut. NASA officials prioritize the missions and programs the agency invests in, and it is simply not feasible to fund every exciting project astronomers propose. (JWST’s budget constituted nearly half of NASA’s astrophysics budget for FY 2015.) Based on my conversations with astronomers, the community remains divided about JWST, though many astronomers are excited about the telescope and note its importance for public outreach.

Large projects rarely stay on schedule and on budget in astrophysics, but JWST was perhaps an extreme case. A decade ago, JWST faced considerable criticism, such as in this Nature article by Lee Billings, because of its many delays and cost overruns. But after much pressure and threats from Congress to cancel the program, NASA officials rebaselined JWST’s budget and conducted a management overhaul in 2011. Since then, scientists have kept JWST within its new $8.8-billion budget and the telescope is on schedule for launch in 2018.

Last Tuesday, the House Science Committee held a hearing reviewing JWST’s progress, called “Searching for the Origins of the Universe: An Update on the Progress of the James Webb Space Telescope (JWST).” According to the American Institute of Physics, the committee’s Chair and Ranking Member, Rep. Steven Palazzo (R-MS) and Rep. Donna Edwards (D-MD), “expressed, as did other subcommittee members, great interest in and support for the telescope.” According to Cristina Chaplain of the Government Accountability Office, JWST has ten months of unused budget reserves, which will be more than enough as it moves into the integration and testing phase.

A few challenges remain. For example, technicians have had difficulty with a “cryocooler” component, which needs to operate at much colder temperatures than other such units in order to keep the Mid-Infrared Instrument sufficiently cool, but it is still scheduled to be delivered this summer. In any case, both John Grunsfeld, associate administrator of NASA’s Science Mission Directorate, and John Mather, JWST’s Senior Project Scientist, expressed confidence to the Committee that this observatory will launch in 2018. “Expect amazing discoveries,” Mather said.

For more coverage, take a look at these articles in Scientific American, Space News, and Space.com. [Full disclosure: I am a member of the American Institute of Physics, and former colleagues at the University of Arizona helped design JWST’s NIRCam instrument.]

2 thoughts on “Challenges of the James Webb Space Telescope, NASA’s Successor to Hubble”