Check out these new articles I’ve written about exciting computer engineering research going on at Stanford University and the University of California, San Diego:

Only an atom thick, graphene is a key ingredient in three Stanford projects to create data storage technologies that use nanomaterials other than standard silicon.

The memory chips in phones, laptops and other electronic devices need to be small, fast and draw as little power as possible. For years, silicon chips have delivered on that promise.

But to dramatically extend the battery life of mobile gadgets, and to create data centers that use far less energy, engineers are developing memory chips based on new nanomaterials with capabilities that silicon can’t match.

In three recent experiments, Stanford engineers demonstrate post-silicon materials and technologies that store more data per square inch and use a fraction of the energy of today’s memory chips.

The unifying thread in all three experiments is graphene, an extraordinary material isolated a decade ago but which had, until now, relatively few practical applications in electronics…

[For more, check out the entire article in Stanford News, published on 23 Oct. 2015. Thanks to Tom Abate for help with editing.]

Most of us use many devices — perhaps too many — throughout the day: A smartphone at home and then at the cafe around the corner, a laptop computer at work and maybe a tablet or e-reader in the evening. That’s not counting all of the other possible “smart” devices at our fingertips, such as health monitors, fitness trackers and smart watches.

Few people think about how all these devices could be efficiently networked via software and wireless technology; however, if you were trying to download a video and coworkers on the same network were attempting to communicate via Google Talk, you would want to be sure those limited wireless resources were allocated optimally.

Giorgio Quer, a postdoctoral researcher in electrical and computer engineering at the University of California, San Diego is on a quest to solve these and other networking problems. Quer has been working on “cognitive networking” and exploring related projects at the UC San Diego division of Qualcomm Institute for the past five years as a visiting scholar from the University of Padua in northern Italy. He works with Ramesh Rao, director of the Qualcomm Institute and principal investigator of the research, as well as Matteo Danieletto, another postdoc in the department.

The concept of cognitive networking, according to Quer, refers to “a way to apply cognition to wireless, where a network learns from past history.” Such a process enables a network to “perceive” and learn about its current conditions and then plan, decide and act on those conditions, resembling (in a limited sense) cognition in the human brain…

[For more, check out the entire article at the California Institute for Telecommunications and Information Technology (Calit2), published on 21 Sep. 2015. Thanks to Tiffany Fox for help with editing.]

By Ramin Skibba and Stephen Young

Following weeks of intense debate in the United States, the international agreement to prevent Iran from developing nuclear weapons, supported by all California Senators and Bay Area Representatives, will go forward. It is an historic arrangement that demonstrates the world’s resolve to prevent the spread of nuclear weapons. However, it will not solve all the nuclear threats that face the world.

END_OF_DOCUMENT_TOKEN_TO_BE_REPLACED

Q: What happens if you fall into a black hole?
– Jane Doe, Calif.

When a dying star much bigger than our sun burns the last of its fuel, it finally collapses under its own weight, explodes, and leaves behind a black hole. If you fell into the black hole, even in a sturdy spacecraft, powerful tides from its gravity would rip you into a ribbon of atoms. 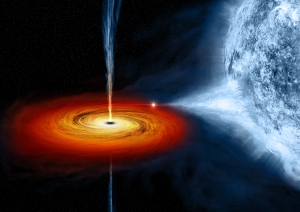 Artist’s drawing of the black hole Cygnus X-1, pulling matter from the blue star beside it. (Credits: NASA/CXC/M.Weiss)

According to Albert Einstein’s relativity theory, the laws of physics break down near extremely massive objects. Black holes have such densely compressed mass that they warp the very fabric of space around them. If you got too close, it would inevitably suck you in. Along the way, you would perceive distorted colors and shapes as if through carnival mirrors. Your clocks would run differently, too; black holes bend not only space, but time itself.

Suppose you fell in feet first. Your legs would feel a much stronger gravitational force than your head. In a fraction of a second, this tide would stretch you and tear you apart like taffy. The resulting shrapnel and debris would spiral into the hole, vanishing forever.

Astronomers see evidence of this at the centers of galaxies, where the largest black holes grow. It happens to entire stars that venture too close, then get shredded in blazes of energy.

[Thanks to Rob Irion for editing help with this piece, which is written to resemble the short Q&A-style articles previously published in Scientific American.]

As long as humans have roamed the Earth, they have looked up to the skies, speculating and pondering about the celestial wonders populating the distant cosmos. From the early astronomers and natural philosophers until today’s (including me), people have observed and studied the billions of twinkling dots, all the while wondering whether there are other worlds out there and whether they might host lifeforms like us.

In his first book, “Five Billion Years of Solitude: The Search for Life Among the Stars,” Lee Billings explores these and related questions. He chronicles the story of space exploration, planet-hunting and the growing field of astrobiology, while meeting fascinating characters and discussing their research, telescopes, discoveries and challenges. He offers clear and compelling explanations, such as of planetary physics and habitability, and he takes important asides into debates on space exploration budgets and the fate of our own planet, including the ongoing climate change crisis.

Billings is a talented science journalist. Like his work for Scientific American and other publications, the book is excellently written and researched. It won the 2014 American Institute of Physics science communication award in the book category, announced at the American Astronomical Society meeting in January.

Over the course of the book, Billings tracks down and speaks with important figures in planetary astronomy. He begins with Frank Drake, who along with nine other scientists in 1961 attempt to quantify the abundance of life-supporting planets in the galaxy in a calculation now known as the Drake Equation. He also meets with other astrophysicists, including University of California, Santa Cruz professor Greg Laughlin, Space Telescope Science Institute director Matt Mountain and MIT professor Sara Seager.

Since the time-scale or life-time of civilizations plays a role in the Drake Equation, his investigations lead to an examination of our own history and the longevity of humanity on Earth. Billings discusses the planet’s changing climate and other looming threats, for which our society appears unprepared. His reporting takes him to southern California too, where he quotes from my former colleague, UC San Diego physicist Tom Murphy, who considered the question of growing global energy consumption.

Other important questions come up as well. How far away are planets beyond our solar system and how long would it take to get there? What kind of atmospheric, geological and climatic conditions must a habitable planet have? How do astronomers detect planets, when they are so small, so faint and so close to their brightly glowing suns? What are our prospects for finding more Earth-like planets?

And what will happen to the Earth and humankind—if we’re still around—over the next few billion years, as our sun brightens, expands and transforms into a red giant star? As Billings starkly puts it in his interview for The Atlantic, “We may have—we may be—the only chance available for life on Earth to somehow escape a final, ultimate planetary and stellar death.” 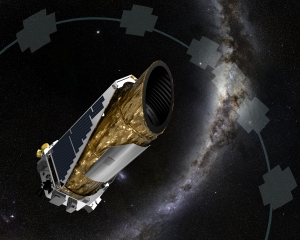 With the Kepler telescope, we have the good fortune to be living at a time when actually Earth-like worlds, not just super-Earths and gas dwarfs, can be identified. Astronomers have already used the telescope to find a few potential Earth cousins, which have the right size and the right “Goldilocks” distance from their stars, and many many more candidates are on the horizon. Under certain conditions, follow-up observations can measure the planets’ atmospheres and climates to further assess their habitability.

It’s an exciting time! With even more advanced planet-finding telescopes coming up, such as the Hubble successors, the James Webb Space Telescope and High-Definition Space Telescope, we can look forward to more detailed images and observations of exoplanets in the near future. Maybe Earth has twins and maybe we are not alone.

I have a few criticisms of Five Billion Years, but they’re very minor ones. I liked the analysis of federal budget debates at multiple points in the book, but Billings could have written a little more about why as a society we should prioritize space exploration and astronomical research. If, say, a member of the House Science Committee (or more likely, their staffer) were to read this, it would be helpful to spell that out. Early in the book, he provides an engaging historical survey of astronomy, but he neglected Eastern contributions, such as from Persians, Arabs and Chinese. A few chapters meandered quite a bit too, but I enjoyed his writing style.

In any case, this is a beautifully written and thoroughly researched book, and I recommend it. Billings puts the search for extraterrestrial life in a broader context and pushes us to think about our place in the vast universe. The story continues.

[P.S. I’m extremely busy these days with the UC Santa Cruz science communication program and writing internships, so I may write posts here less often. But I will link to pieces I’ve written elsewhere, which have the benefit of rigorous editing, so if you like my blog, you’ll like them even more.]