In case you missed them, here’s a few new pieces I’ve written and published for Undark magazine, Knowable magazine and Eos magazine over the past month. Thanks as usual to all of my excellent editors. I’m only posting brief excerpts here, so please check out the whole thing using the links below.

Bringing Science to Bear, at Last, on the Gun Control Debate

Despite the restrictions on CDC funding, research into gun violence has actually increased in recent years. How can the findings inform public policy? 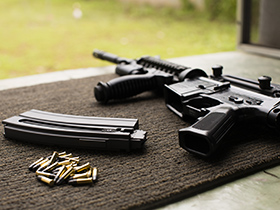 Guns and parts places on a table in a shooting range (Image courtesy: Bureau of Alcohol, Tobacco, Firearms and Explosives)

February’s mass shooting at Marjory Stoneman Douglas High School in Parkland, Florida, which resulted in 17 killed and 17 more wounded, horrified people across the country, spurring student walkouts and marches in support of stricter gun control laws, including universal, comprehensive background checks and a ban on assault weapons. But gun debates in the United States have proven to be contentious and intractable. Indeed, even as thousands rally for new legislation, opponents contend that such measures won’t prevent determined criminals from obtaining a firearm and that responsible gun ownership makes communities safer.

In charting a course forward, it is necessary to move beyond “people’s anecdotal opinions,” says David Hemenway, director of the Harvard Injury Control Research Center. He and other researchers are analyzing data and conducting studies with the ultimate goal of informing public policy. It’s a tough task, in part because of a by now well-known piece of legislation called the Dickey Amendment, passed by Congress in 1996 with support of the National Rifle Association. This amendment prevented the Centers for Disease Control and Prevention from using funds “to advocate or promote gun control.” It didn’t ban federally-funded gun research, but the legislation had a chilling effect: from 1996 to 2013, CDC funding in this area dropped by 96 percent.

Against this backdrop, it can be easy to overlook an important fact: Research into gun violence has actually increased in recent years, rising from fewer than 90 annual publications in 2010 to 150 in 2014. Universities, think tanks, private philanthropy — even the state of California — have been offering support. And last Wednesday, governors from six northeastern states and Puerto Rico announced plans to launch a research consortium to study the issue. A December 2017 policy article published in the journal Science describes a “surge” of recent scientific publications. “The scope and quality of gun-related research is growing,” write the authors, a pair of researchers from Duke and Stanford, “with clear implications for the policy debate.” This research has generated significant findings about suicide, intimate partner violence, community health, and the effect of various state-level gun laws…

[Read the entire review in Undark magazine, published on 30 April.]