In case you missed them, here’s a few pieces I’ve recently written and published for Hakai magazine and Inside Science. Thanks as usual to my excellent editors. I’m only posting brief excerpts here, so if you’re interested, please check out the whole thing using the links below.

The Search for Life on Mars Begins in Iceland

NASA is sending a rover to Mars in 2020 to look for signs of life. To know which signs to look for, scientists are studying geothermal sites in coastal Iceland. 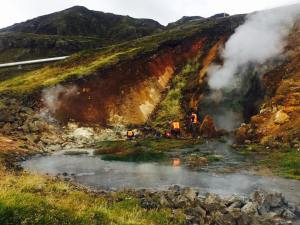 On a misty day near Reykjavik, on Iceland’s west coast, Bethany Ehlmann hiked along the edge of the fjord Hvalfjörður. Nestled between the steep cliffs and vertical veins of lava, she found what she was searching for: a rock with signs that showed water once flowed here.

The marks in the rock were subtle—little more than speckles and banding—but they suggested much more than the presence of an ancient trickle of water. They were earthly clues that would help Ehlmann, a planetary scientist and geologist at the California Institute of Technology, better understand the conditions in which life may have arisen on Earth. And, potentially, on Mars.

Before Mars became the frigid, inhospitable desert it is today, scientists think it looked a lot like coastal Iceland. Modern Iceland’s iron-rich rocks, glaciers, volcanoes, and hot springs reflect conditions on Mars more than three billion years ago. This makes Iceland a great trial ground for upcoming missions to Mars, including that of the Mars 2020 rover. Set to launch in 2020, this mission will, among other things, search for evidence of extraterrestrial life…

[Read the entire piece in Hakai magazine, published on 12 December.]