We’ve had some fantastic astronomical news this month. Last week, we encountered evidence of a “new ninth planet” lurking in the outer reaches of our solar system—170 years after the discovery of Neptune. And earlier in January, we heard a cacophony of whispers about minute gravitational waves being detected for the first time ever. Either one, if true, would be amazing to both astrophysicists and space lovers and would be the biggest discovery of 2016. We should be excited about them, but we should be careful about getting our hopes up so soon.

A New Planet, Far, Far Away?

A couple fellow science writers and I went hiking at Castle Rock State Park in the middle of the Santa Cruz Mountains yesterday, and along the trail, we encountered a variety of people. On our way down, we happened to overhear a conversation: “What’s your favorite planet?” followed by a reply, “Did you hear about the new planet scientists discovered?” Isn’t that great? I’m glad that the story got so much media attention and made it to the front pages of newspapers. It intrigued people, and they’re talking about it.

By studying the strangely aligned orbits of Kuiper Belt Objects far beyond Pluto’s realm, astronomers may have inferred evidence of a planet up to 10 times bigger than Earth. It would be much, much farther than Pluto, making it hard to spot. And from that distance, our sun would look almost like any other star. But if it exists, a new world (dubbed “Planet X”) joining our solar system’s family, even such an estranged cousin, would be exciting indeed. 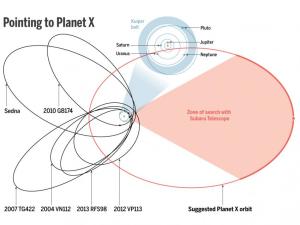 Eric Hand (Science magazine) points out that the Subaru Telescope could search for Planet X. (Data) JPL; Batygin and Brown/Caltech; (Diagram) A. Cuadra/Science

Nevertheless, we should be concerned that the results are still very uncertain. The authors of the paper in Astronomical Journal, Konstantin Batygin and Mike Brown (both at Caltech), argue that there’s only a 0.007% chance, about one in 15,000, that the clustering of the distant objects’ orbits could be a coincidence. But it’s possible that the behavior of the orbits could have other possibly more likely explanations, such as other unseen Kuiper Belt Objects with orbits aligned in the opposite way. (Other astronomers, like Scott Sheppard and Greg Laughlin, estimate the chance of a planet really being out there at 60-70%. I wouldn’t bank on those odds.)

For that reason, we should remain skeptical for now. Some reporters and editors were a bit more careful than others. For example, while some headlines used appropriately hedging words like “suggest” and “may,” papers like the Denver Post and Washington Post had “The New No. 9” or “Welcome to Planet Nine.” This is already an exciting story to tell though, and we don’t need to exaggerate to get readers’ attention. If the planet turns out not to exist, people who read overblown headlines like those will be frustrated and confused.

Finally, we should all recall that Mike Brown was the main force behind Pluto’s demotion by the International Astronomical Union ten years ago. Since he calls himself the “Pluto Killer” (and wrote a book, “How I Killed Pluto and Why It Had It Coming”), it would be ironic if he helped discover a new ninth planet, replacing Pluto. But he and the Caltech news office seem to have hyped up his paper’s findings more than they deserved, given all the uncertainties involved.

While procrastinating and flipping through Twitter earlier this month, I came across some juicy gossip. I heard what sounded like the tantalizing detection of gravitational waves—an unprecedented achievement. These tiny ripples in space-time, predicted by Albert Einstein and thought to be produced by collisions of black holes or neutron stars, had been too small to measure before. Gravity is the weakest of forces, after all.

But it turns out that Lawrence Krauss, a well-known cosmologist and provocateur at Arizona State University, had caused the hullabaloo with some ill-advised tweets. He once again drew the media’s limelight to himself by spreading rumors that scientists in the Laser Interferometer Gravitational-Wave Observatory (LIGO) collaboration had detected gravitational waves for the first time. In the process, he put those scientists in a tough spot, as I’m sure they faced pressure to make sensitive statements about their ongoing research.

The LIGO Laboratory operates two detector sites, one near Hanford in eastern Washington (pictured here) and another near Livingston, Louisiana. (Credit: Caltech/MIT/LIGO Lab)

The LIGO team is still working on their analysis using a pair of detectors in Louisiana and Washington state, and they haven’t yet produced conclusive results. From what I can tell, they may have evidence but the situation is far from clear. There is nothing wrong with waiting a while until you’ve thoroughly investigated all the relevant issues and sources of error before announcing a momentous discovery. The alternative is to prematurely declare it, only to face the embarrassing possibility of retracting it later (which sort of happened to BICEP2 scientists with their supposed discovery of primordial gravitational waves).

Gravitational waves will have to remain elusive for now. And if and when LIGO physicists do have convincing evidence of gravitational waves, they need not share any of the glory or credit with Krauss.

Fortunately, in spite of this excitement, science writers and editors kept their cool and soberly pointed to Krauss’s rumors before digging into the fascinating and painstaking work LIGO scientists are doing. Here’s some excellent coverage by Clara Moskowitz in Scientific American and by Lisa Grossman in New Scientist.

[26 Jan. update: I decided to tone down my criticism of Mike Brown, but not of Lawrence Krauss.]

Here’s two related stories I reported on and wrote for the Monterey Herald newspaper over the past week:

Higher-than-average rainfall last week, in the midst of an El Niño winter, has raised concerns about landslides and mudslides in Monterey County.

And those concerns are warranted. Although dangerous landslides have not been witnessed in the area this year, historically January and February is prime time. More than 60 percent of landslides happen in those months, when enough rain has been sopped up by the ground to loosen the soil, said John Stock, a U.S. Geological Survey landslide expert in the San Francisco Bay Area.

Vehicles get trapped in a mudslide on Highway 1 three miles south of Esalen on Feb. 13, 1987. The major winter storm caused this section of roadway to be closed for weeks. (Herald file photo)

There are a few key elements for landslides: gravity and water. After four years of drought, the soil might take a little longer to be saturated by rain, but is still vulnerable.

“Weak rocks and steep slopes are the main factors, and they’re helped by rainfall,” said Chris Wills, a geologist for the California Geological Society.

Geologists have identified two varieties of landslides and debris flows: a fast-moving kind and a slow-moving kind. Fast-moving landslides tend to occur during or shortly after intense rainstorms. The soil acts like a sponge, soaking up water in its pores until no more water can be absorbed. Then the freely moving water exerts pressure and pushes the sand grains apart. On steep eroding hillsides, this can generate landslides, spreading shallow soil and rocks downhill.

Slow-moving landslides are much larger and deeper, typically happening after a delay — days, weeks or even months after a lot of rainfall has accumulated. Such a landslide occurred in La Conchita near Santa Barbara during the winter of 2005, killing 10 people and damaging dozens of homes. They begin by creeping down slower than at a speed of an inch per year, making them hard to spot. Then they accelerate as massive amounts of earth, boulders and trees tumble down.

“There are two reasons to worry about landslides,” said Wills. “Fast-moving ones can be dangerous to people, and deep slow-moving ones can affect roads, pipelines and houses built on them. These cause significant costs to society,” he added…

[For more, check out the entire story in the Monterey Herald, published on 10 Jan. 2016. Thanks to David Kellogg for editing assistance.]

Every winter rainy season brings storms and heavy surf that erode shores and wash away sand, which waves return to the coast in summer. But El Niño generates extra rain and higher sea levels, which increases the erosion during intense and windy storms, affecting coastal bluffs and beaches around Carmel, Pacific Grove, Pebble Beach and Monterey. 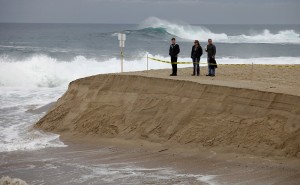 People watch as the Carmel River flows to the ocean at Carmel River State Beach on Monday, January 11, 2016. County crews worked with equipment on Sunday to start the breach through the sand bar at the southern channel. The river broke through on its own sometime Sunday night. (Vern Fisher – Monterey Herald)

“Southern Monterey Bay has the most highly erosive beaches in all of California,” said Paul Michel, superintendent of the Monterey Bay National Marine Sanctuary.

Continual rainstorms swelled the waters of Carmel River last week. After 10 p.m. Sunday, a sand barrier built to keep the river from breaching at the Carmel Lagoon was washed away, according to Melanie Beretti, program manager at the Monterey County Resource Management Agency. After considering bulldozing sand back in place, officials expressed concern about it just getting flushed out to sea, so they decided to hold back.

“We need to balance when and how to utilize the sand,” Beretti said.

The beach has been reopened to visitors, and the Resource Management Agency and National Oceanic and Atmospheric Administration continue to monitor the situation to protect the steelhead trout habitat in the lagoon.

This incident could be a small taste of much bigger things to come. Abnormally large storms and big tides could damage roads, bike paths, hiking trails, water lines, sewage systems or even homes close to the coast…