Just as astronomers are examining dwarf planets, they’re investigating dwarf galaxies too. Two weeks ago, an international collaboration of scientists with the Dark Energy Survey (DES) peered around the southern hemisphere and announced in a paper in the Astrophysical Journal that they found candidates for nine new “satellite” galaxies around our Milky Way. For those of you keeping count—and many people are—if confirmed, this means that we now have 35 satellites in our Local Group of galaxies, which could even tell us something about the dark matter out there. 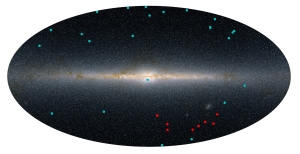 An illustration of the previously discovered dwarf satellite galaxies (in blue) and the newly discovered candidates (in red) as they sit outside the Milky Way. (Image: Yao-Yuan Mao, Ralf Kaehler, Risa Wechsler.)

The smallest known galaxies (as might be inferred from their name), dwarf galaxies are extremely faint and difficult to detect, sometimes only containing a few hundred stars and appearing to blend in with the stars in the disk of the Milky Way. They can also be difficult to distinguish from globular clusters, which are just clumps of stars that evolved with a galaxy and orbit around its core.

Astrophysicists refer to galaxies that travel around a larger galaxy as “satellite” galaxies. In many cases, these galaxies were previously floating through space, minding their own business, until the gravitational force of the massive galaxy pulled them in. Some astronomers think that that is what happened to the Small Magellanic Cloud and Large Magellanic Cloud, the brightest satellites of the Milky Way. (The Persian astronomer Abd-al-Rahman Al-Sufi discovered the LMC in 964 A.D., and it does sort of look like a “cloud.”) To give these satellites some perspective, they’re mostly between 100,000-200,000 light-years away, while the Milky Way’s radius is about 50,000 light-years, which is already much longer than the road to the chemist’s.

Keith Bechtol (University of Chicago) and Sergey Koposov (University of Cambridge) led parallel studies with the DES, which uses an optical/infrared instrument on a telescope at the Cerro Tololo Inter-American Observatory in the Chilean mountains. “The discovery of so many satellites in such a small area of the sky was completely unexpected,” says Koposov. These findings only include the first-year data of the DES though, and the research team stands poised to discover as many as two dozen more satellite galaxies as they continue their survey. 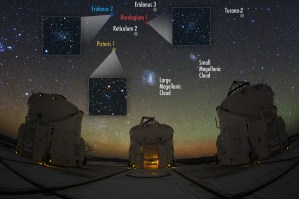 In 2005-2006, Koposov and his colleagues (Vasily Belokurov, Beth Willman, and others) found about half of the previously detected satellite galaxies of the Milky Way with the Sloan Digital Sky Survey (SDSS), the DES’s predecessor in the northern hemisphere. The SDSS and DES are powerful enough to detect and resolve faint dwarf galaxies that hadn’t been observed before, transforming this field and stimulating interest in the Milky Way’s neighborhood.

Dwarf galaxies could reveal new information about dark matter, since their mass in stars is outweighed by thousands of times by the mass of dark matter particles surrounding them. Astrophysicists developing numerical simulations of growing clumps of dark matter, thought to host galaxies within them, have been concerned that more satellite clumps form in the simulations than satellite galaxies have been observed in the Milky Way–a discrepancy referred to as the “missing satellites” problem. It’s not clear yet whether the newly discovered satellite galaxy candidates could solve or complicate this problem. Moreover, astrophysicists continue to worry about other problems, including disagreements between observed galaxies and simulations involving the masses and angular momenta of dark matter clumps. In any case, scientists working with the DES continue to push the debate further, and their ongoing survey will be of great interest to the astronomical community. 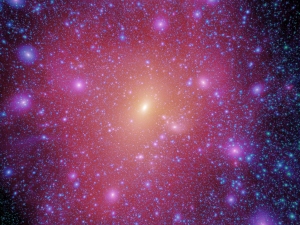 For more coverage, check out this article by Monica Young in Sky & Telescope and articles in Wired and Washington Post. If you’re interested, you can also see my own earlier research on satellite galaxies in dark matter models and on the Magellanic Clouds.