Senator Coburn (R-OK) doesn’t like political science. (Is that why he’s retiring from politics this year? I doubt it.) In fact, he doesn’t seem to like the social sciences in general and would prefer to eliminate their funding from the National Science Foundation (NSF). His recent attempt at an amendment that would restrict political science funding was defeated, but we can’t always count on that happening, especially considering Rep. Lamar Smith (R-TX) and a few others share his views. Science budgets can fluctuate year by year, which has real consequences for scientists who depend on that funding and who have students and long-term projects that require consistent funding.

A couple months ago, I participated in the Congressional Visit Day with colleagues from the American Astronomical Society (AAS). Our goal was to talk to our Congress members about the importance of stable funding and investment in scientific research, telescopes, education, and outreach, and to encourage them to make these a priority. We focused on astronomy and astrophysics funding from the NSF and NASA, though there are other relevant agencies and departments, such as the Department of Energy. Although most Congress members and their staff seemed receptive to our message (including Coburn’s staff, who had nothing against the physical sciences), unfortunately the spending restrictions and numerous budget priorities make this a particularly complicated situation. This year’s story begins with the president’s proposed Fiscal Year 2015 budget, which leaves many agencies with sub-inflation budgets (without the Opportunity, Growth, and Security Initiative), so how will the story end? What’s a scientist to do?

Since we can agree that investing in science is critically important, we should follow the process in which these budgets are put together and negotiated. To do so though, we need to look into how the proverbial sausage is made—and it’s really more of a dubious hot dog than a gourmet bratwurst. The budget negotiation process is seemingly transparent, but to me it seems opaque in some ways and rather precarious—a good idea can get shot down and an unfortunate amendment could get stuck in the draft, for example. It’s kind of scary that the state of science in this country (and the fate of many scientists and their research programs) depends on so many unpredictable and capricious factors, though we can hope that the important issues are ironed out by the time a budget is finalized. We’re also affected by prior budget constraints, especially from the spending caps due to the Budget Control Act (which gave us the universally reviled “sequestration”).

I’ll give a brief description of the current state of affairs, but if you want more information, I refer you to the experts, especially Matt Hourihan (director of R&D Budget and Policy Program at AAAS) and Josh Shiode (Public Policy Fellow of AAS). And if you’re interested in seeing how our R&D funding compares to other countries, it shows total R&D (circle size) and as a function of GDP (x-axis) (the figure is taken from this). 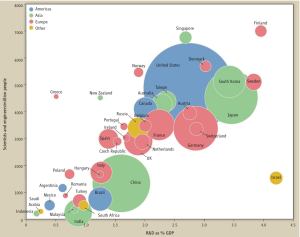 First, we started with the Obama administration’s proposed FY 2015 budget request (PBR). At that point, the budget had to be negotiated by the House Commerce, Justice, Science (CJS) Appropriations Subcommittee, which included a “markup” process. The bill that emerged included increases to NASA and NSF’s budgets relative to the PBR and FY 2015 as well as smaller increases to education and human resources. The NSF budget certainly could have been worse, since there were lower funding levels in the controversial Frontiers in Innovation, Research, Science, and Technology Act (FIRST Act)—previously passed by the same committee—which was strongly opposed by university and science groups. The CJS bill also included small decreases to the budgets of the National Oceanic and Atmospheric Administration (NOAA) and the National Institute of Standards and Technology (NIST) relative to the inflation rate. (More details are here.)

The budget then went to the House floor in May, and a modified budget was passed at the end of the month. House Majority Leader Eric Cantor (R-VA, who was defeated in a primary election) and House Science Committee Chairman Lamar Smith (R-TX) narrowly passed an amendment that reduced funding to the NSF’s Social, Behavioral, and Economics (SBE). In another development, Rep. Rush Holt (D-NJ, one of the only scientists in Congress), tried to restore funding for NOAA climate research that was cut by the Appropriations Committee, but this amendment failed. (For more details about the House budget bill, look here and here.)

The Appropriations bill also included an amendment proposed by Rep. Alan Grayson’s (D-FL) that would provide protection for journalists against compulsory disclosure of their confidential sources. “That right is recognized in 49 states, but it’s not codified at the federal level,” Grayson said. The amendment passed by a vote of 225-183.

The Senate Appropriations Committee produced a modified budget bill last week and a series of reports about individual agencies. This article describes the budget differences for NASA in the Senate bill vs the House bill and vs the previous year (FY 2014). Although the total NASA budget are similar in the Senate and House bills, the Senate allocates funding within the Science Mission Directorate (SMD) differently: the Senate bill includes more for exploration and less for aeronautics, space technology, and space operations. Unfortunately, both bills have decreased funding for education, though the funding levels are not as low as in the Obama Administration’s PBR.

Fortunately, both bills rejected the President’s proposal to cut the Stratospheric Observatory for Infrared Astronomy (SOFIA). The allocated funding would be enough for NASA to continue to cover its share of the operating costs. The Senate committee also provided funding for the Wide-Field Infrared Survey Telescope (WFIRST), which is planned to launch in the mid-2020s.

This article describes the Senate vs House budget differences for the NSF. Unfortunately, the Senate Appropriations Committee gave the NSF a lower funding level by 2.1% than the House, but it’s possible that this may change. I’ll also mention that a couple months ago the Senate confirmed France Córdova as the new director of the NSF. She said that better communicating the importance of the basic research that the NSF supports is one of her priorities. Córdova is an astrophysicist, the former president of Purdue University, and now the second women to head the agency.

Now the “minibus” (as opposed to “omnibus”) bill heads to the Senate floor this week, so the next steps depend on these 100 people: 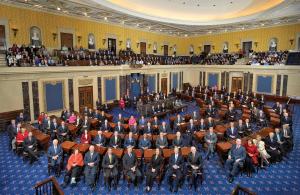 (Note that the various budget bills are being considered separately; for example, Labor, Health and Human Services bill, which funds the Affordable Care Act, will be more controversial and likely will take more time.) We may see important changes and amendments in the near future, and I will try to keep this page updated. The differences between the House and Senate budget bills will need to be resolved, and that can be a contentious process. We hope that the Senate will be less stingy with NSF funding and that it will continue with the Appropriations Committee’s funding levels for NOAA and NIST. There was some disagreement about the Office of Oceanic and Atmospheric Research’s work on climate research and ocean acidification, and these will have to be resolved as well. To be continued…

6 thoughts on “And the science budget debates continue…”