I attended an interesting forum at UC San Diego on Thursday, and this post is based on that. It was titled, “The Future of Fracking in California: Energy, Environment and Economics,” and the speakers included: Taiga Takahashi, Associate in the San Diego office of Latham & Watkins; Mark Ellis, Chief of Corporate Strategy for San Diego-based Sempra Energy; and Andrew Rosenberg, Director of the Center for Science and Democracy at the Union of Concerned Scientists. I’ll just summarize some of the more important points people made (based on my incomplete notes), and you can decide what you think of them. 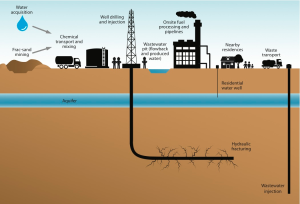 Taiga Takahashi described the legal situation in California vis-à-vis hydraulic fracturing (fracking). Governor Jerry Brown supports “science-based fracking” that is protective of the environment. Brown also touts the economic benefits, including the creation of 2.8 million jobs (though this figure was disputed). In contrast, the CA Democratic party supports a moratorium on fracking. The bill SB 4 on well stimulation was passed in September requires the state Department of Oil, Gas & Geothermal Resources (DOGGR) to adopt regulations regarding water well testing and other tests of air and water pollution. New regulations will be developed by January 2015 while an environmental impact study will be completed six months afterward (my emphasis). Fracking restrictions are mostly similar to those in Colorado and much better than those in Pennsylvania. Takahashi argued that a “consensus approach” on fracking regulation in CA could be reached, which would include nongovernmental organizations (NGOs), the state, and industry.

Mark Ellis is a representative of industry. Sempra Energy is a major natural gas utility that owns San Diego Gas & Electric and Southern California Gas. Ellis argued that the “shale revolution” (his term) has made gas cheap relative to oil and thereby reduced prices. Gas is used mostly for power, since many are making a switch from coal to gas, as well as in industry and residential areas. There are also opportunities for using gas in transportation, such as with compressed/liquefied natural gas (LNG). Sempra is expanding production and building pipelines from Texas and Arizona to Mexico. Ellis argued that the “shale revolution” is being or could be replicated in other places, such as the UK, Australia, Brazil, and Russia.

Andrew Rosenberg spoke about a couple recent Union of Concerned Scientists (UCS) reports: “The Curious Case of Fracking: Engaging to Empower Citizens with Information” and “Toward an Evidence-Based Fracking Debate,” written by Pallavi Phartiyal, him, and others. He brought up many issues, such as the use of pipeline infrastructure vs trains and the relation between fracking, chemical plants, and oil. Importantly, fracking is a many-step process (as you can see in the figure at the top of this post), which includes water acquisition, chemical transport and mixing, well drilling and injection, a wastewater pit, onsite fuel processing and pipelines, nearby community residences and residential water wells, and waste transport and wastewater injection. The most important point he made is that we as a society must decide when particular actions are worth the risks, and to what extent those risks can be mitigated with regulations. There should be as much transparency as possible and plenty of opportunities for public comment. It’s important to close loopholes in federal environmental legislation; disclose the chemical composition, volume, and concentration of fracking fluids and wastewater; we require baseline and monitoring requirements for air water, and soil quality; make data publicly accessible; and engage citizens and address their concerns. (My views were mostly in agreement with Rosenberg’s. Full disclosure: I am an active member of UCS.)

After the speakers, there were a few comments and questions. I was surprised that this was the only time during the forum that climate change issues were raised. The issue of water usage was discussed as well, because of our ongoing drought. (In related news, Gov. Brown and the state Legislature just passed a drought relief package.) It also was clear that Sempra and other companies wouldn’t voluntarily make changes unless industry-wide regulations were applied; Ellis argued that singling out particular companies is counter-productive. It’s possible that there will be new Environmental Protection Agency (EPA) regulations on water and air pollution in the future.

The fracking debates in California continue. For example, the Los Angeles City Council is taking steps toward a fracking ban, and a rally against fracking is being organized at the Capitol in Sacramento in two weeks.

4 thoughts on “The Future of Fracking in California”