I’d like to say a bit about climate change. It’s an issue that I’m passionate about, as it’s one of the most important global crises facing us today, and there will be plenty more to write about in later posts.

As a possible future for our own planet, it’s useful to think of Venus.  Although there are no Venusians to ask about it, we can infer what happened to Venus based on observations of its surface and atmosphere.  Venus and Earth likely had similar early atmospheric compositions, but on Earth the carbon is mostly in the crust.  In Venus’s case, its atmosphere is mostly CO2, and it appears to have suffered a “runaway” greenhouse gas effect.  Venus’s surface temperature of nearly 500° C is due to its atmosphere’s depth and CO2 content.  In order to reach Venus-like conditions on Earth, massive amounts of CO2 would need to accumulate and would need to get rid of its oceans via escape of hydrogen to space, which would take at least hundreds of millions of years. 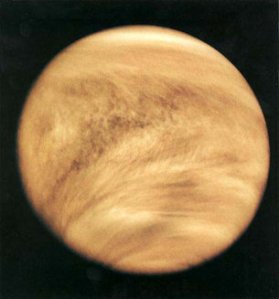 Nonetheless, it only takes much smaller amounts of CO2 emissions and much less time to change the biosphere and harm human and other life on earth.  It is already happening.  And because the climate responds slowly, so far we’ve only felt about half of the effect of the greenhouse gases that are already in the air.

According to the Scripps Institution of Oceanography (which is a few blocks from here at UCSD), the daily mean concentration of CO2 in the atmosphere surpassed 400 parts per million (ppm) in May this year.  The Keeling curve below documents the dramatic rise of this potent greenhouse gas over the last half century. 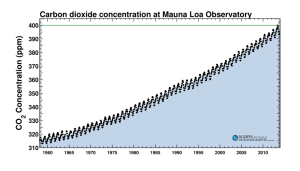 More CO2 in the atmosphere means that more of it is absorbing and trapping the infrared radiation of sunlight near the Earth’s surface, gradually raising the temperature.  There are many effects and evidence of climate change, but one key one is that surface temperatures on Earth are increasing.  Last year was the hottest year on record and this year is the seventh hottest. According to climate scientists, 350 ppm should be our goal in order to prevent runaway climate change, but it will require concerted international efforts to substantially reduce carbon emissions to safe levels.

A global problem requires global solutions.  But what can be done and is being done about climate change (including at the UN and by US policies) will be the subject of “part 2”.

Finally, for those of you who’d like more eloquent writing about these issues, check out this essay from Carl Sagan’s Cosmos.