An anti-Russian propaganda project operating under the State Department and Broadcasting Board of Governors threatens to do more harm than good, while raising the stakes of battles over truth and facts in the media. 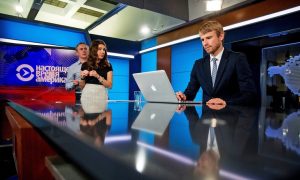 With fears growing of “fake news” and Russian influence on the November election, former President Obama upgraded the Global Engagement Center two days before Christmas last year, as part of the National Defense Authorization Act. Its stated goal is to counter “foreign state and non-state propaganda and disinformation efforts aimed at undermining United States national security interests.” But the line between propaganda and counter-propaganda is rather thin, and now President Trump and Secretary Rex Tillerson have the reigns.

Led by veterans of Voice of America and Radio Free Europe / Radio Liberty, the center plans to try to correct false claims from outlets like Russia Today, though it also has China, Iran, and the Islamic State in its sights. It’s targeting its messaging at foreign audiences abroad, but as popular news is global these days, some of its programming will easily reach American media consumers, too.

The Global Engagement Center’s activities include television and radio programs, online news, and a social media presence. It’s one thing though to use such tools and broadcasts to debunk false reports and unverified claims, whether about airstrikes or elections, but the organization is more ambitious than that. Its purpose includes “proactively advancing fact-based narratives that support US allies and interests,” according to a presentation obtained through a Freedom of Information Act request.

If they’re advocating for American foreign policy interests, that’s going farther than just presenting facts. This isn’t just splitting hairs; for an administration that not only believes in “alternative facts” and “truthful hyperbole” but also at times appears to be at war with the media, the risks of sliding into propaganda are very real. A broadcast that discourages a potentially violent recruit of the Islamic State is one thing, but if it promotes US foreign policy, that’s a different matter, and it could backfire.

Furthermore, Trump may tap Michael Pack, an ally of Steve Bannon, to head the Broadcasting Board of Governors, which is already no longer controlled by a bipartisan board. The Global Engagement Center and Voice of America could lose any semblance of independence as they continue to reach more than 100 countries in 61 languages — but potentially with broadcasts more favorable to Trump’s White House.

In the age of “fake news,” this scrutiny of anti-propaganda efforts also exposes the limits of fact-checking. When checking a fact, journalists have to consider what sources to choose and whose authority to trust. A news program that seems impartial or objective to one person may simply assume a status quo long criticized by others. Journalists should be more conscious of such assumptions.

Finally, it remains unclear if American journalists could be targeted by the Global Engagement Center. It’s focused on foreign media and audiences, but well-intentioned or not, it’s not hard to imagine American reporters critical of Trump’s policies being caught in its net. For example, let’s not forget the much-criticized Washington Post news story last November about “Russian propaganda efforts spreading fake news during the election,” according to the headline. It was based on an anonymous website called PropOrNot, whose list included disinformation outlets as well as legitimate US-based news sources.

On the road ahead, let’s hope that the Global Engagement Center strives for transparency and consults independent journalists about controversial programming. In the meantime, I’m hoping that we reporters, as well as readers and watchers of the news, more carefully pay attention to what’s said and what’s not said — and to who’s doing the talking.