My partner and I recently had a baby, whom we of course named after a 9th century Persian scientist and writer. For a creature so tiny, our baby has surely delivered huge changes to our lives. I was out on paternal leave for the month of June (the only month this blog has gone post-less since 2013), and I’ve had much to observe and think about over those sleep-deprived days and nights. Here are a few samples, assembled in no particular order.

1. Having a baby changes the way I view many things. Events and activities in the baby’s life naturally take on great importance for me. At the same time, I feel like I’m often trying to take the long view of things and think of the big picture, and I’m careful not to take the baby or my partner for granted. I stoically face many day-to-day concerns that used to bother me in the past. Well maybe not so stoically—taking care of a baby is even more challenging than I expected—but I do think my tolerance for stress and lack of sleep has gone up.

Here’s my baby’s stuffed pterodactyl, reminding me to stay focused on the important things.

2. It’s been an interesting experience bonding with my baby. He magically/biologically appeared in my life with me really having no relationship with him at the time. But over the past six weeks, as he has grown rapidly, our relationship has bloomed, and I can’t describe how much I love him. I love his frog-like hiccuping, his well-timed side-eye, and the way he furrows his brow just like his mother.

3. As I read about science news and scientific discoveries for my work, I can’t help but view them through the lens of a parent. A study about the vocal learning of songbirds makes me wonder how I’ll teach my son multiple languages. (See also this essay in Aeon. How children learn language is actually a fascinating and poorly understood subject.) The recent finding that one third of humanity cannot see the Milky Way because of light pollution makes me wonder how my child will view the night sky. In my opinion, how we see the sky affects how we view our lives on Earth. (By the way, the National Park Service, now celebrating its centennial, has an amazing photo gallery.) 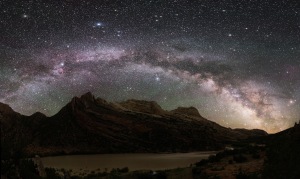 4. Gender stereotypes and pressures on mothers persist, as people tend to view new mothers juggling work and a kid as “distracted” while new fathers balancing work and life are viewed as “responsible.” (See this recent sociological study, for example.) We definitely have a long way to go to achieve gender equality. And I still have much to learn about balancing all these responsibilities.

5. Some people ask, why would you have a kid in today’s dangerously warming and overpopulated world? I read the following in a piece by Jonathan Franzen in the New Yorker last month: “It’s true that the most effective single action that most human beings can take not only to combat climate change but to preserve a world of biodiversity, is to not have children.”

No, that’s not true. This doesn’t make sense to me, as these may be tough times but we’re not living in some post-apocalyptic dystopia. Our planet more easily supports five billion humans than eight billion, but the latter is not impossible. And in general, each woman and couple has to answer for themselves the complicated question about whether or not to have a kid.

To be sure, a new human being may turn out to be not much more than yet another producer of greenhouse gas emissions. Or they may become a force for good and part of the solution. Furthermore, as I’ve written before, it’s a mistake to overemphasize the problem of overpopulation, which puts the burden on the poor; excessive consumption per capita is a much bigger problem.

Here’s a controversial quote toward the end of her book: “What matters is that people change the world…This capacity is probably indistinguishable from the qualities that made us human to begin with: our restlessness, our creativity, our ability to cooperate to solve problems and complete complicated tasks. As soon as humans started using signs and symbols to represent the natural world, they pushed beyond the limits of that world…Were people simply heedless or selfish or violent, there wouldn’t be an Institute for Conservation Research, and there wouldn’t be a need for one. If you want to think about why humans are so dangerous to other species, you can picture a poacher in Africa carrying an AK-47 or a logger in the Amazon gripping an ax, or, better still, you can picture yourself, holding a book on your lap.”

In my opinion, Kolbert, too, is mistaken about the role of humans in the world. Humans do have a tendency to spread, sometimes unwittingly or purposefully destroying things in their path. But that doesn’t have to be the case, and we need not be so critical or cynical about humanity. She seems to think that humanity’s dominant and unchangeable qualities are selfishness, destructiveness, and shortsightedness. Yes, humans have contributed to the extinction of countless species, but that’s a trend that need not continue indefinitely. (She also mentions climate change and suggests that the only positive way we might address it is with farfetched geoengineering schemes, but that’s not true either.) Moreover, if we try to find a way to look with hope to the future, we, along with our offspring, will work harder to change it for the better.

2 thoughts on “Random thoughts from a new father/science writer”