Peering through their powerful telescopes, scientists observe a stunningly diverse array of phenomena, including comets, planets, stars, gaseous nebulae, novae, quasars, galaxies, and numerous other exciting things. But astrophysicists argue that these light-emitting objects only amount to a tiny fraction of the universe. According to the latest measurements from the European Space Agency’s Planck telescope earlier this year, they account for less than 5% of the universe’s matter and energy, while mysterious-sounding “dark matter” accounts for nearly six times as much. Nevertheless, dark matter cannot be seen and does not interact with normal matter, so how did astronomers figure out that so much invisible, intangible stuff exists out there? 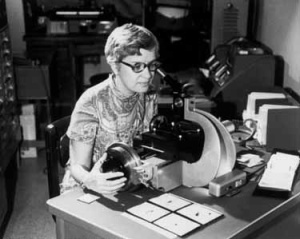 As I recently wrote in a post for the International Year of Light, the story of scientists’ discovery and exploration of dark matter began many decades ago. Physicists had long utilized Newton’s and Einstein’s gravitational laws to estimate our sun’s mass by measuring planets’ distances from it and examining how fast they travel around it. For example, Mercury is very close to the sun and orbits it much faster than Pluto, which takes 248 Earth-years to complete an orbit. (If you’re wondering, the sun has a mass larger than a trillion billion billion kilograms. That’s a lot!) Similarly, it turns out that one can make such calculations for stars within galaxies and infer the enclosed mass, but the results of the analysis are not so simple to understand. 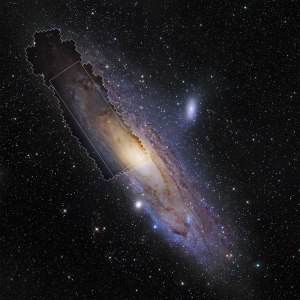 In the 1960s and 1970s, American astronomer Vera Rubin measured and analyzed the precise velocities of stars in spiral galaxies and came to a startling conclusion. Most stars at outer radii orbit the center at surprisingly large speeds, much faster than they should be based on the mass of the stars themselves, but the galaxies do not tear themselves apart or fling their stars hurtling away. Studying galaxies, such as Andromeda, as a whole, she found that they rotate too quickly for their stars’ gravity to keep them intact. It was as if the galaxies contain and are surrounded by much more unseen dark matter, which gravitationally binds the galaxies together. Rubin’s crucial discovery has not yet received the recognition it deserves.

This critically important area of research came to be known as galaxy “rotation curves,” in which Rubin became an influential figure. Rotation curve measurements of spiral galaxies from two of her many highly-cited publications appear in the reference, Galactic Astronomy, which every respectable astrophysicist has on their bookshelf. Her measurements from hundreds of galaxies constitute strong evidence for the existence of massive clumps of dark matter extending to many thousands of light-years beyond the edge of the galaxies themselves. Astrophysicists also considered the alternative hypothesis that Newton’s gravitational laws need to be modified for objects separated by large distances, but that approach has been less successful and lacks support among the community.

Vera Rubin turns 87 years old today. She continues her work at the Department of Terrestrial Magnetism at the Carnegie Institution of Washington, and she still publishes research in galactic astronomy. In addition, she writes popularly such as in Scientific American and Physics Today. Moreover, she inspires, supports, and encourages young people, especially women, in science. This includes her four children, all of whom have earned Ph.D. degrees in the natural sciences or mathematics.

In 1965, Vera Rubin was the first woman permitted to observe at Palomar Observatory. When she applied to graduate schools, she was told that “Princeton does not accept women” in the astronomy program; she went to Cornell instead. As she put it in a recent astronomical memoir, “Women generally required more luck and perseverance than men did.” In her 1996 book, Bright Galaxies, Dark Matters, she wrote

Since the 1950s, opportunities for women in astronomy have increased, but serious problems have not disappeared…The saddest part, of course, is that only about one-fifth of the women who enter college intend to study science. Lack of support and encouragement at an early age has by then taken its toll. A young woman who enters graduate school to study science is a rare creature indeed…but the colleges are often a part of the problem rather than part of the solution.

Now with many years of hard work and persistence, people are making gradual progress. For example, Meg Urry leads the American Astronomical Society, France Córdova is the director of the National Science Foundation, and Marcia McNutt now heads the National Academy of sciences. But much more work needs to be done to reduce gender inequality and underrepresentation throughout science research and education.

Many people argue that Vera Rubin would be a strong contender for a Nobel Prize in Physics, and I join that call. She has already won many other awards, including the National Medal of Science, but the Nobel would officially recognize her enormous contributions to astrophysics and her critical role in illuminating the way to dark matter. Considering that the 2011 Nobel Prize went to Saul Perlmutter, Brian Schmidt, and Adam Riess for discovering dark energy, it’s time for dark matter to have its day.

One thought on “Happy Birthday to Vera Rubin, Discoverer of Dark Matter”