The conflict over Mauna Kea, where astronomers seek to build one of the world’s largest telescopes and where Native Hawaiians consider sacred ground, continues. The situation escalated in early April when protesters, defending their land and angry about their concerns being ignored, managed to stop construction on the Thirty Meter Telescope (TMT), which was planned to be built by 2024 and begin detailed observations of distant galaxies and other objects at optical-infrared wavelengths. 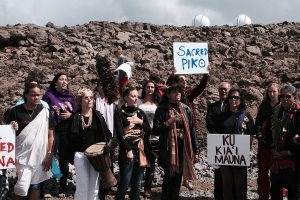 After police arrested 31 peaceful protesters for blocking the road to the summit, the new Hawaii governor, David Ige, called for a temporary halt to construction of the telescope on 7 April. “This will give us some time to engage in further conversations with the various stakeholders that have an interest in Mauna Kea and its sacredness and its importance in scientific research and discovery going forward,” Ige said. The situation remains at an impasse, and he extended the construction moratorium multiple times since then.

This is only the latest battle in an ongoing dispute. (See my previous post on the TMT and protests last fall.) Astronomers have found that Mauna Kea, on Hawaii’s Big Island, is an ideal place to build ground-based telescopes because of its “seeing” statistics. Optical and infrared images are less distorted by light traveling through the atmosphere here than in many other places. Although many indigenous Hawaiians have allowed smaller telescopes to be built on the mountain, it becomes more controversial as astronomers try to construct more and larger telescopes on these protected lands which hold a great cultural importance for them. The TMT also drew opposition from celebrities of Native Hawaiian descent, including Jason Mamoa (Khal Drogo on Game of Thrones), who encouraged others to join the protests.

In addition, the protests drew more media attention than the last time, during the ground-breaking. For example, see these excellent articles by Azeen Ghorayshi on Buzzfeed and Alexandra Witze in Nature, as well as other articles in Science, New Scientist, and NPR. George Johnson also discussed the protests in the New York Times, though his column clearly sides with the TMT.

Supported by US and international universities as well as the National Science Foundation (in the form of “partnership-planning activities”), the TMT is the primary 30-meter-class telescope given priority by the US astronomical community in the 2010 Decadal Survey and highlighted in a recent National Research Council report. The other two planned telescopes in that class include the European-Extremely Large Telescope (E-ELT) led by the European Southern Observatory and the Giant Magellan Telescope (GMT) led by an international consortium of universities, both of which are under construction in northern Chile. All three telescopes are scheduled to have “first light” in the early 2020s. During the planning phase of the TMT, in addition to Mauna Kea, astronomers considered other possible locations as well, also including northern Chile and Baja California, Mexico.

The Native Hawaiian position is not monolithic, but some groups oppose the construction of the TMT and others would support it if negotiations took place in good faith and with respect and not only in Western spaces. The protesters are not a small minority, and they don’t believe that their voices have been heard. Many Hawaiians make it clear that they are not against science or astronomy; for example, the Mauna Kea Protectors “[take] a stand specifically against scientific practices that do a lot of damage—to our planet, to traditional native cultures, and to public health and safety.”

They and others make arguments on cultural, environmental, and legal grounds. If built, the TMT would dominate the landscape as it would rise 18 stories above the mountain, at an elevation of 4200m, and would disturb a large area of its slope. Moreover, the Mauna Kea summit lies within a conservation district, and therefore according to Hawaiian law certain (arguably unsatisfied) criteria must be met before construction there. Finally and most importantly, many believe that Mauna Kea is a sacred and special place that must be protected, and those beliefs have not been sufficiently respected by the authorities. (For more information, see here and here.)

The official position can be found on the TMT website and at Mauna Kea and TMT. Furthermore, Claire Max, Interim Director of UC Observatories, recently made an official statement promoting the latter as a source for information “with links to balanced news stories about the project and the protests” and that “TMT…[has] profound regard for Hawaii’s culture, environment and people.”

The TMT does have support among some native Hawaiians, and TMT authorities have set up a $1 million annual scholarship fund, named The Hawaii Island New Knowledge (THINK) Fund, which will be administered by the Hawaii Community Foundation. They have initiated a Workforce Pipeline Program in Hawaii as well. Like the Hawaiian organizations, they insist that they have the law on their side, but unlike them, they refer to the TMT as a done deal and fait accompli rather than as the subject of an ongoing dispute. According to the University of Hawaii position, “more than 20 public hearings have been held during the process and the project has been approved by then Governor Neil Abercrombie, the UH Board of Regents and the Board of Land and Natural Resources…The project has also cleared legal challenges and was upheld in the Third Circuit Court.”

From what I have seen, this dispute has generated heated debates in the astronomical community in various social media. For example, in the “Diversity in Physics and Astronomy” Facebook group (with 1700 members), astronomers made more posts and comments about the TMT and protests than about any other issue over the past few months. Astronomers expressed a wide range of views on Twitter as well, some of which were highlighted recently by Emily Lakdawalla’s Storify timeline, “Astronomy Progress is Not Universal.”

Like many astronomers and astrophysicists, I’m torn. While the TMT would be a boon for science and scientists, especially those who study galaxies, supernovae, stars, and planets, that is not the only criterion by which such a project should be evaluated. The state of Hawaii and the United States in general have a long history of colonialism and disrespect for indigenous peoples and cultures, and unfortunately the TMT risks falling onto the wrong side of that history. For now, I think that the moratorium on construction should continue and substantial negotiations should take place, and if that delays the schedule, so be it. If more native Hawaiians and organizations do not decide to support the TMT, the astronomical community should consider a different site or even terminate the telescope altogether. I realize that the cost of either action would be great, considering the huge international investment that has already taken place, but the price of desecrating native Hawaiians’ sacred and protected land is much higher.

I see strong opinions on each side, and many have distributed petitions and sought to gain more public and media support. How will astronomers and Hawaiians proceed? I hope that they will use this time to discuss the situation with respect and as equals, and they may determine whether a resolution that satisfies many eventually can be achieved.