The title sounds like I’ll tell you a fable or short story or something. This is neither of those things, but it is quite a story! I’m not personally involved in the Rosetta mission, though I’ll do my best to tell you about it and what’s unique and exciting about this. (For you fellow astrophysicists reading this, if I’ve missed or misstated anything, please let me know.) And if you’d like more information and updates, I recommend looking at Emily Lakdawalla‘s blog posts on ESA and Phil Plait‘s blog on Slate. If you’re interested in the history and importance of comets (and about how “we’re made of starstuff”), check out Carl Sagan and Ann Druyan’s book, Comet.

Rosetta, the €1.3 billion flagship space probe (see below) of the European Space Agency (NASA’s European counterpart) has chosen to accept an ambitious mission: to chase down, intercept, and orbit a distant comet, and then send the lander Philae to “harpoon” itself to the surface and engage in a detailed analysis. Rosetta is obviously named after the Rosetta Stone in Egyptian history, and Philae is named after an island in the Nile. Rosetta and Philae are hip spacecraft: they even have their own Twitter accounts—@ESA_Rosetta and @Philae2014, respectively. They should be careful when examining the comet below its surface, because if it’s anything like Star Trek, they could find an ancient alien archive in the center! (Fans of the “Masks” episode will know what I’m talking about.)

Comets are literally pretty cool. They’re clumps of ice, dust, and organic materials with tails that are hurtling through space. What is this comet Rosetta’s pursuing? It’s known as Comet 67P/Churyumov-Gerasimenko, named after a pair of Ukrainian astronomers who discovered it in 1969. 67P/C-G looks like a mere blob from a distance, but it’s 4km in diameter and lopsided with two barely-attached lobes that make it look like a rubber duck from certain angles. “It may be an object we call a contact binary which was created when two smaller comets merged after a low-velocity collision,” said mission scientist Matt Taylor, or it may have once been a spherical object that lost much of its volatile material after encounters with the sun. It also has plumes of dust and gas (from sublimated ices) erupting from the surface, which has a temperature of about -70 C. (The montage of images below are courtesy of ESA/Rosetta/NAVCAM/Emily Lakdawalla.) 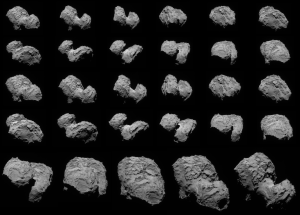 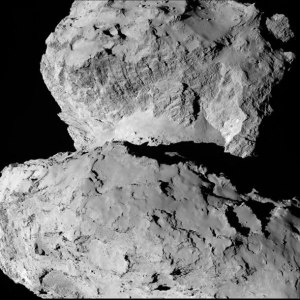 Comets tell us about our past, since they’re thought to have formed in the cold of the outer solar system 4.6 billion years ago. They also yield information about the formation of the solar system and about the role of comets in delivering water and organic material to Earth in its history—possibly influencing the origin of life here. Cometary impacts are known to have been much more common in the early solar system than today. There may be billions of these dirty snowballs (or icy dustballs) orbiting the sun, and thousands of them have been observed. Prior to Rosetta, three comets have been analyzed by space probes: Halley’s comet by ESA’s Giotto in 1986, Comet Wild 2 by NASA’s Stardust in 2004, and Comet Tempel 1 by NASA’s Deep Impact, which slammed into it in 2005. The diagram below (courtesy of ESA/Science journal) shows the orbits of Rosetta and 67P/C-G. The comet has been traveling at speeds up to 135,000 km/hr, and Rosetta had to use flybys of the Earth and Mars to maneuver onto the same orbital path. Rosetta will be the first mission ever to orbit and land on a comet, so this is really an historic moment in space exploration. 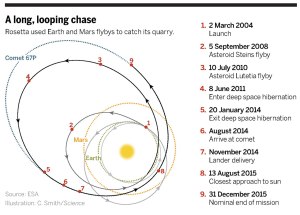 On 11 November, Rosetta will be in a position to eject the Philae lander from only a couple kilometers away. Philae is 100 kg, box shaped with three legs and numerous instruments for experiments (see below), and was provided by the German Aerospace Research Institute (DLR). NASA scientists talk of the “7 minutes of terror” as the Curiosity rover descended to Mars, but Philae’s descent will take hours. Note that 67P is so small and gravity is so weak that the lander would likely bounce off, which is why it needs the harpoons as well as screws on the legs to bolt it to the surface. If the landing is successful—let’s cross our fingers that it is—it will perform many interesting experiments with its instruments. For example, CONSERT will use radio waves to construct a 3D model of the nucleus, Ptolemy will measure the abundance of water and heavy water, and COSAC will look for long-chain organic molecules and amino acids. COSAC will also detect the chirality of the molecules and maybe determine whether amino acids are always left-handed like the ones on Earth. (“Chirality” means “handedness”. I think the only other time I heard the term was for the spin statistics of spiral galaxies.) 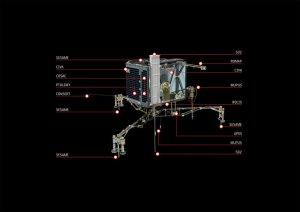 Let’s hope for Rosetta’s and Philae’s success! I’ll update you on this blog when I hear more information.

5 thoughts on “Rosetta and the Comet”