I attended a conference this weekend called “The Physics of Sustainable Energy” at the University of California, Berkeley. It was organized by people affiliated with the American Physical Society, Energy Resources Group, and a couple other organizations. Most of the speakers and attendees (including me) seemed to be Californians. I had some interesting conversations with people and attended some great talks by experts in their fields, and here I’ll just give you a few highlights.

First though, I want to make two general comments. I did notice that only ~20% of the speakers were women, which is worse than astrophysics conferences, and it’s too bad the organizers weren’t able to make the conference more diverse. (There were a few people of color speaking though.) Secondly, I think it’s excellent that people (and not just in California) are actively involved working on solutions and innovations, but I think we should be careful about an technophilic or technocratic emphasis. This was a conference for physicists and engineers though, and energy policy and communication with the media and policy-makers, for example, were mostly beyond the scope of it. I was struck by the apparently close ties with industry some speakers had (such as Amory Lovins and Jonathan Koomey); to some extent that’s necessary, but I was a little concerned about potential conflicts of interest.

…On to the conference. Ken Caldeira spoke about the global carbon balance. When accounting for CO2 emission per capita from fossil fuel use and cement production: the US is worst (50kg CO2/person/day), followed by Russia, China and the EU. California emits half as much as the rest of this country, but 2/3 of the difference is due to a fortunate climate (it doesn’t get very cold); according to an audience member (Art Rosenfeld?), “we’re mostly blessed with good luck as well as some brains.” Daniel Kammen (one of the organizers) then talked about developing a framework for energy access for all. According to the International Panel on Climate Change (IPCC AR4 in 2007): “warming will most strongly and quickly impact the global poor.” Kammen described the concept of “energy poverty”: 1.4 billion people lack access to electricity today, and that will still be the case for a similar number in 2030, with more having unreliable/intermittent access. There appears to be a strong correlation between electricity access and human development index. 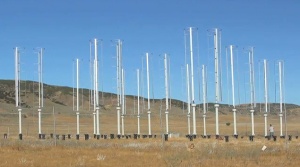 It seems that many people are working on interesting research & development on renewable energy sources. Jennifer Dionne spoke about the “upconversion” of solar cells, which includes thermodynamic, electronic, and photonic design considerations. The upconversion process improves cell efficiency by at least 1.5× (see Atre & Dionne 2011), and it often works well at optical near-infrared wavelengths. (She pointed out that of energy from the sun, 5% is in the UV, 43% in optical, and 52% in infrared. And if you’re interested in what those proportions are like for different types of galaxies, check out my recent paper.) Then Chris Somerville spoke about the status and prospects of biofuels, the production of which is currently dominated by the US and Brazil. The combustion of biomass has challenges for providing low-carbon energy: depends on tilling of soil, land conversion, fertilizer, transportation, and processing. I’m concerned about deforestation and effects on ecosystems as well as the effects on food/crop prices (remember the food riots in 2007-2008 and the rising cost of corn/maize?). In my opinion, Somerville didn’t sufficiently address this, though he did argue in favor of miscanthus and other biomass rather than the use of corn. John Dabiri spoke about the advantages of vertical-axis wind turbines (called VAWTs, see the figure above), in addition to the ubiquitous horizontal-axis variety. VAWTs have a smaller structure size and cost, simpler installation logistics, and are safer for birds and bats as well. Currently only four countries get >10% of their electricity from wind (Spain, Portugal, Ireland, Denmark, followed by Germany with 9%), but this can be easily improved.

This flow diagram is pretty nice, and it describes current energy use in the US (presented by Valerie Thomas). And Daniel Kammen, in a paper on the relation between energy use, population density, and suburbanization, shows the spatial distribution of carbon footprints (where the units are tCO2e, or total carbon dioxide equivalent per household).

Tilman Santarius give a nice talk about energy efficiency rebound effects, which is closely related to my previous post, where you can find more information. He discussed the interactions between energy efficiency, labor productivity, human behavior, and economic growth, and he distinguished between rebounds due to an income effect vs a substitution effect. In any case, average direct rebound effects appear to be around 20-30% (Greening et al. 2000; Sorell 2007), in addition to a 5-10% of indirect rebound. In other words, around 1/3 of income savings due to energy efficiency is lost because of an increase in energy demand. He also talked about the psychology of rebounds, including moral licensing (such as Prius drivers who drive more) and moral leakage (people feel less responsible). It will be a difficult task to try to separate energy demand from economic growth.

There were many other interesting talks, but I’ll end with the issue of climate adaptation and geoengineering. Ann Kinzig described how the combined risk of a phenomenon is the sum Σ p (event) × impact (event). Mitigation seeks to reduce the probability p while adaptation seeks to reduce the impact. Climate change will have impacts on food, water, ecosystems, and weather events, and decision-makers in urban areas can try to prepare for these (see this website). Kinzig also spoke about historical case studies of failed adaptations by people in the Hohokam (Arizona), Mesa Verde (Colorado), and Mimbres (New Mexico) regions, and the dependence on societal hierarchy and conformity. Alan Robock spoke about the risks and benefits of “geoengineering”, which involves gigantic projects in the future to address climate change, such as space-based reflectors, stratospheric aerosols, and cloud brightening (seeding clouds), and basically involve using the Earth as a science experiment with a huge cost of failure. In particular, he studies the many problems of injecting sulfate aerosols into the stratosphere to cool the planet. (Some people have supported this idea because of the supposedly benign effects of volcanic eruptions in the past.) He discussed the potential benefits of stratospheric geoengineering but compiled a list of 17 risks, including drought in Africa and Asia, continued ocean acidification, ozone depletion, no more blue skies, military use of technology, ruining terrestial optical astronomy, moral issues, and unexpected consequences. For more on Robock’s research and for other useful references, go here. 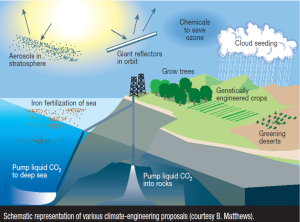 One thought on “The Physics of Sustainable Energy”