Since President Obama will deliver his State of the Union address on Tuesday, I’d like to write a bit more about energy policy, which may come up during the address in the context of the Climate Action Plan that was initiated last summer (when the picture below was taken). In addition, some new energy policies that are being advocated would create new jobs, especially in manufacturing and government sectors, whose employment rates haven’t improved much yet during the recovery from the economic recession. 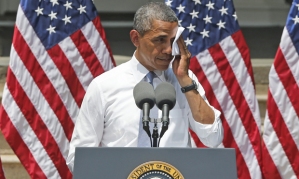 The president can call on Congress to do its part to pass laws that will complement his Climate Action Plan. Some of the recommendations below would be difficult to achieve in the current political climate, but it’s important to at least demonstrate the political will and public commitment to improve energy and climate policies.

1. President Obama could urge Congress to extend tax incentives for renewable energy technologies, in particular for solar electricity and wind power, which have already expired for the latter. These could at least be extended to 2020. This may be politically feasible, considering that some conservatives are now in support of renewable energy. This is also popular: wind and solar power increased nearly four-fold in the US over the past five years, and nine states currently generate 10% or more of their electricity from wind and solar power. The technology already exists to have dynamic electricity grids that are designed to handle variability in supply (such as due to unexpected weather) and demand, making it possible to transition to an increasing reliance on renewables and less on fossil fuels. (See this report for more info.)

2. President Obama could lay the ground for eventually rejecting the Keystone XL pipeline (see also our earlier post). He said last year that it would be approved “only if this project does not significantly exacerbate the problem of carbon pollution.” We have to wait for a supplemental Environmental Impact Statement before a final decision will be made.

3. The Environmental Protection Agency (EPA) has proposed a carbon pollution standard for new power plants. These limits, which are required under the Clean Air Act, could be applied to existing plants as well. In order to meet the carbon pollution reductions outlined in the Climate Action Plan, 25% cuts in carbon pollution will be required.

4. The president could outline new energy efficiency policies for homes, automobiles, businesses, and industries. For example, the industrial sector is responsible for about 1/3 of all U.S. energy use. Energy-efficient building designs and investment in high-efficiency combined heat and power systems can reduce these energy demands. For cars and trucks, Corporate Average Fuel Economy (CAFE) standards should be enforced by the EPA and Department of Transportation. In addition, a June 2012 study by the Blue Green Alliance finds that the new round of CAFE standards will create an estimated 570,000 full-time jobs throughout the US economy by 2030. The president could also urge Congress to expand investment in public transportation infrastructure that was begun in the The Recovery Act; this too would create thousands of new jobs.