Here’s a few new stories I reported on and wrote for the Monterey Herald newspaper over the past couple weeks:

When a stranded sea otter baby was rescued on Carmel Beach by Monterey Bay Aquarium workers in January, it was a rare enough event to be featured on the television news.

But with more El Niño-strengthened rainstorms returning to the Monterey Bay, these rescues might become more commonplace.

Storms increase the potential for pups to be separated, said Tim Tinker, a biologist for the U.S. Geological Survey and UC Santa Cruz. Otters like to feed closer to shore in shallower water, where the waves are bigger during El Niño. Storms also rip up kelp forests, giving the animals less shelter and resting areas, he added.

Only a few otters have been rescued so far this year, said Andrew Johnson, manager of the aquarium’s Sea Otter Program. “We’re holding our collective breath about the effect of conditions out there.”

Most pups are born between late fall and early spring, and they require many months of nursing and weaning. Adult otters spend much of their time foraging for food, as they need to eat 25 percent of their body weight every day. But an otter mother can’t forage as much and becomes weak by the end of the weaning period.

“She’s on the razor’s edge. It sounds pretty harrowing, but that’s the way they are,” said Tinker. Storms can split up otter pups from their mothers during this particularly vulnerable period. On their own, pups struggle to survive and don’t have much time before they starve or freeze to death.

This is where the aquarium’s sea otter rescue program comes in. Often responding to calls from citizens and networks of volunteers, their staff annually rescue dozens of distressed otters stranded on the shore. Sometimes a pup can be heard before it is seen, chirping or squeaking for its lost mother. In addition to suffering from food limitations, older otters are sometimes found to be sick with disease or injured by white sharks.

When the animals meet certain criteria and respond well to treatment, then the rescue program adopts them. Staff members feed and care for the otters in giant circular tanks, filled with kelp and companions, with plenty of room to swim, play and rest. They pair the pups with a surrogate mother, who helps them grow and learn to survive on their own. After they recuperate, which can take months, the otters are tagged and released back into the wild. “We want them to go out and be a productive member of sea otter society,” said Johnson…

[For more, check out the entire story in the Monterey Herald, published on 5 March 2016. As usual, thanks to David Kellogg for editing assistance and to Vern Fisher and David Royal for their excellent photography.]

California’s Central Coast faces a challenging future, with economic and population growth running up against rising sea levels and fewer federal dollars to support the coastal economy, a new report from the Middlebury Institute of International Studies at Monterey concludes.

“Nearly 50 percent of the U.S. economy is generated by coastal counties and 83 percent by coastal states,” said Judith Kildow, lead author and director of the Middlebury Institute’s National Ocean Economics Program. “If that continues to grow, we need a plan.”

San Carlos Beach Park in Monterey on Monday. A recently released report from the Middlebury Institute of International Studies at Monterey points out that rising sea levels will be just one of the challenges facing coastal economies. (Vern Fisher — Monterey Herald)

Her policy- and economics-oriented report collected information through 2014 from businesses in counties in coastal areas or adjacent to the shoreline, as well as “non-market” ecosystem services, including beaches, fisheries and wetlands.

Since 2010, of all the coastal states, California’s coastal economy has experienced the second-highest employment and economic growth, measured by gross domestic product. It now employs nearly 16 million people and its economy amounts to $2.1 trillion.

Tens of millions of Californians live in coastal counties, and the population in these areas is slowly growing. But at the same time, federal ocean-related expenditures have steadily declined by 8 percent, while the state continues to endure a historic drought and the early effects of climate change.

“The coast is where climate change impacts are among the highest,” said Kildow.

People are concerned about rising sea levels as the oceans warm and arctic and Antarctic ice melts. Carbon dioxide in the oceans causes acidification, which affects fisheries and coral reefs and is especially harmful to the shellfish industry. Storm surges, which create flood hazards and erosion along the coast, are predicted to become more intense as climate change continues…

[For more, check out the entire story in the Monterey Herald, published on 22 February 2016.]

Mapping fog: Charting the comings and goings of the coast’s frequent visitor

As the sun rose on the third round of the AT&T Pebble Beach Pro-Am last Saturday, players were swinging under blue skies. An hour or so later, the tournament was in a fog delay. A few hours after that, players were once again playing under a blue sky.

Fog billows up over Point Lobos as Philipp Schindler drives on the eighth hole at Pebble Beach Golf Links during the third round of the AT&T Pebble Beach Pro-Am on Saturday. (David Royal — Monterey Herald)

A group of scientists working with the U.S. Geological Survey has just completed the first detailed maps of fog and low cloud cover of the region spanning from Point Arguello south of San Luis Obispo to Humboldt Bay in Northern California. They recently published their findings, which will prove useful for many people, including farmers, ecologists, water managers, forest and beach managers, and solar panel distributors.

“We wanted to create a rich database of how many hours of fog we see per day,” said Alicia Torregrosa, a USGS geographer based in Menlo Park and lead author of the study. “We hadn’t had a good view of what the fog belt looked like before.” 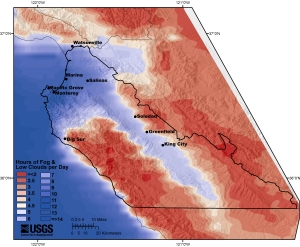 The Salinas Valley is the recipient of more than five hours of fog and low clouds every 24 hours. (USGS)

Torregrosa and her team compiled more than 23,000 images taken day and night over a decade using a National Oceanic and Atmospheric Administration satellite. They mapped out the “fog belt,” a narrow undulating strip along the coast that receives more than three hours of fog every 24-hour period.

Fog is most frequent during the dry summer months from June to September, when the scientists collected their images. On the coast, wind drives an upwelling of cold water on the ocean surface, creating a temperature gradient that cools the moist air above. Water vapor then condenses into droplets in the air, producing the fog, which provides moisture to the area.

The Salinas Valley, a productive agricultural area many miles inland, is the recipient of more than five hours of fog and low clouds every 24 hours. Salinas also experiences more night-time fog than most other places.

Farmers throughout Monterey County may benefit from the maps, as many plants depend on the fog. Moisture-loving crops like strawberries flourish in foggy areas, while other ones in need of more sunlight or drier microclimates, such as wine grapes, need to be grown in more arid areas farther from fog…

[For more, check out the entire story in the Monterey Herald, published on 18 February 2016.]